Ethanol is a renewable, domestically produced alcohol fuel made from plant material, such as corn, sugar cane, or grasses. Using ethanol can reduce oil dependence and greenhouse gas (GHG) emissions. Ethanol fuel use in the U.S. has increased dramatically from about 1.7 billion gallons in 2001 to about 14.5 billion in 2019.1 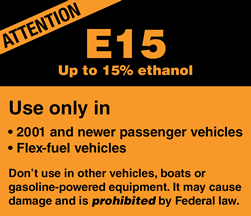 E10 and E15 are blends of ethanol and gasoline. The number after the "E" indicates the percentage of ethanol by volume.

Most of the gasoline sold in the U.S. contains up to 10% ethanol—the amount varies by region. All automakers approve blends up to E10 in their gasoline vehicles.

As of 2011, EPA began allowing the use of E15 in model year 2001 and newer gasoline vehicles.2 Pumps dispensing E15 must be labeled (see example). A vehicle's owner manual may indicate the maximum ethanol content recommended for it by the automaker.

Ethanol contains about one-third less energy than gasoline. So, vehicles will typically go 3% to 4% fewer miles per gallon on E10 and 4% to 5% fewer on E15 than on 100% gasoline.3

E85, also called flex fuel, is an ethanol-gasoline blend containing 51% to 83% ethanol, depending on geography and season. Summer blends tend to have more ethanol while winter blends have less.4 E85 can be used in FFVs, which are specially designed to run on gasoline, E85, or any mixture of the two. FFVs are offered by several automakers. We provide a brief guide to help you determine if your vehicle can run on flex fuel.

MPG. Due to ethanol's lower energy content, FFVs operating on E85 get roughly 15% to 27% fewer miles per gallon than when operating on regular gasoline, depending on the ethanol content. Regular gasoline typically contains about 10% ethanol.5

Cost. The cost of E85 relative to gasoline or E10 can vary due to location and fluctuations in energy markets. E85 is typically cheaper per gallon than gasoline but slightly more expensive per mile.

Performance. Drivers should notice no performance loss when using E85. In fact, some FFVs perform better—have more torque and horsepower—running on E85 than on regular gasoline.6,7,8

This website is administered by Oak Ridge National Laboratory for the U.S. Department of Energy and the U.S. Environmental Protection Agency.

This website is administered by Oak Ridge National Laboratory for the U.S. DOE and the U.S. EPA.